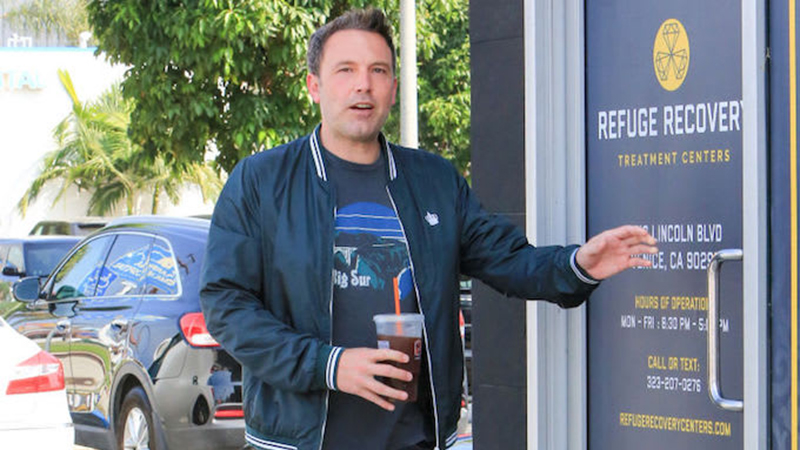 Ben Affleck is heading back to rehab. The actor, 46, is seeking treatment for alcohol addiction.

A source tells, “He is seeking treatment. He knew he needed help and was vocal about it.”

The move to enter a treatment facility came after his ex Jennifer Garner was photographed arriving at his home on Wednesday.

The Peppermint actress was seen leaving Affleck’s upset and shaking. When she returned, Garner, Affleck and an unidentified woman who arrived at the actor’s home with her were photographed in a car the actress was driving.

The mother of three reportedly stopped by a Jack In The Box in the Pacific Palisades before the trio drove to a treatment facility in Malibu.

On Monday, the Justice League star was photographed receiving an alcohol delivery outside of his Brentwood, California, home.

Affleck was seen outside of his house wearing a dark gray T-shirt and light gray sweatpants as he picked up a Pacifico beer-branded box filled with what appeared to be Johnnie Walker Blue Label scotch whisky in a blue case and some other unidentifiable bottles.

While the actor, 46, has been in ongoing treatment and attending meetings for alcohol addiction, his new flame, Playboy’s May 2018 Playmate, 22, told the magazine her go-to drink is “whiskey all day.”

“Bourbon, for sure,” she added. “I like whiskey and soda, which makes people cringe, but I like it.”

“Is she happy about him hanging out with a very young Playboy model? Certainly not,” a source says in this week’s new issue. “But her concern right now is not who he is dating. What she ultimately cares about is his sobriety and whether she can rely on him to co-parent.”

Just before his 46th birthday on Aug. 15, a friend of the actor told that “Ben is doing well. He is in a good place mentally and has worked really hard to get there.”

“He continues to focus on himself and the health of his relationships,” the friend added. “He attends meetings, many meetings, and he also does meditation and yoga.”

“While he still has his moments — and let’s be honest, everyone struggles — he continues to work hard on himself.”

His first time in rehab was in 2001. In March 2017, Affleck announced that he had completed treatment for alcohol addiction.

“I have completed treatment for alcohol addiction; something I’ve dealt with in the past and will continue to confront,” he wrote on Facebook. “I want to live life to the fullest and be the best father I can be. I want my kids to know there is no shame in getting help when you need it, and to be a source of strength for anyone out there who needs help but is afraid to take the first step. I’m lucky to have the love of my family and friends, including my co-parent, Jen, who has supported me and cared for our kids as I’ve done the work I set out to do. This was the first of many steps being taken towards a positive recovery.”