You are at:Home»Celebrities & Mental Health»Sinead O’Connor discuss her mental health with Dr. Phil 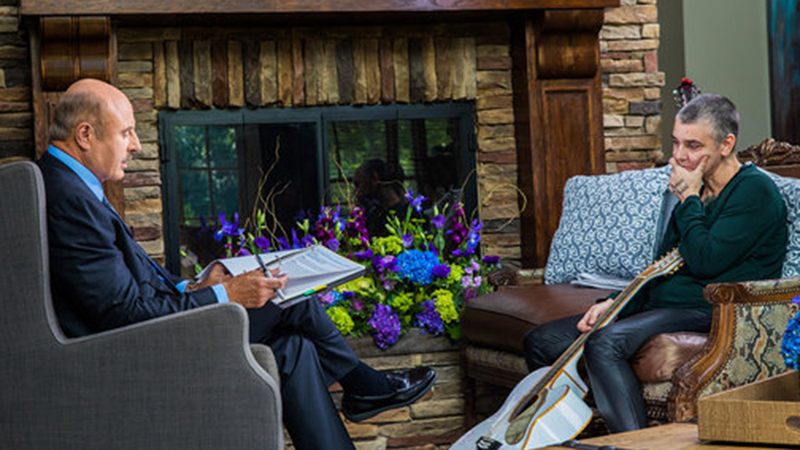 The troubled singer Sinead O’Connor sat down with “Dr. Phil” McGraw for a rare TV interview to discuss her mental health.

Sinead O’Connor will address the most recent bout of headlines pertaining to her mental health on the season premiere of Dr. Phil.

In a preview of the episode, O’Connor looks solemn as she declares to the talk show host that she is “fed up of being defined as the crazy person.” Last month, the Irish singer-songwriter best known for her 1990 cover of Prince’s “Nothing Compares 2 U” posted a tearful video to Facebook from a motel room in New Jersey. In it, she professed to feeling suicidal.

At one point during the preview, the Grammy winner simply nods wordlessly when Dr. Phil asks whether she tried to kill herself eight times in one year. (Last May, O’Connor was reported missing in Wilmette, Illinois, before being found by police; in November 2015, she wrote a post on Facebook claiming that she had overdosed.)

O’Connor will also talk about her mother, who died in a car crash when O’Connor was 19 years old, and who the singer claims was both sexually and physically abusive.

“She ran a torture chamber,” O’Connor says in the clip. “She was a person who took delight in hurting you.”

Dr. Phil sat down with Jimmy Kimmel on Jimmy Kimmel Live!Wednesday, and explained how the singer came to appear on his show, revealing that O’Connor had been the one to reach out.

“You’ve seen her video she’s posted on Facebook and all, from motel rooms in New Jersey,” he said. “She really has had a difficult time, and she said, ‘Look, I’m in trouble. I need help.’ And she called. She said, ‘I want to de-stigmatize mental illness; I clearly have a problem. … Too many musicians are dying. I want to use my life, be a teaching tool. I’m willing to sit down and talk.'”

READ:  If Carrie Fisher Couldn’t Beat Bipolar and Addiction, How Can I?

O’Connor’s chat with Dr. Phil is set to air on Tuesday, September 12th.

McGraw told Jimmy Kimmel this week on Kimmel’s late-night show that O’Connor reached out to the “Dr. Phil” show for help.

“She called and she said, ‘I want to destigmatize mental illness,’ ” he said. “She said, ‘I clearly have a problem, too many musicians are dying. I want to use my life, be a teaching tool. I’m willing to sit down and talk.’ ”