You are at:Home»Mental Health»Depression»Ketamine could help thousands with severe depression 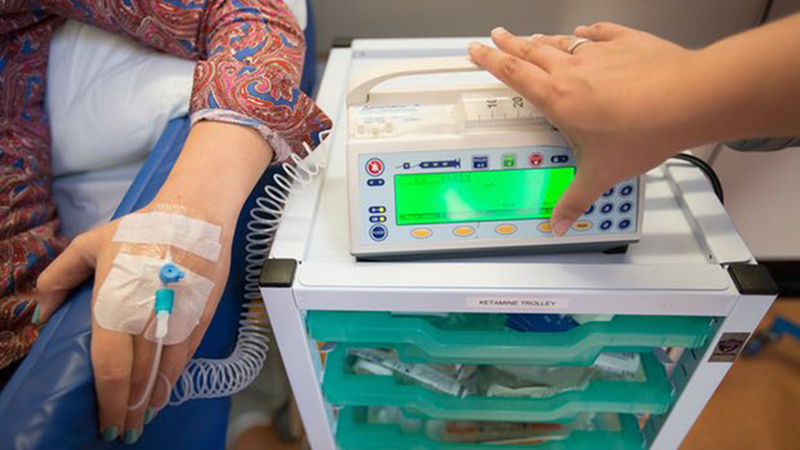 A patient is treated with ketamine at Warneford hospital, Oxford. Photograph: Graeme Robertson for the Guardian

Psychiatrists hail benefits of ‘transformational’ drug, and call for more trials to explore its potential

The drug has been championed by doctors and psychiatrists as a potentially life-changing treatment for those with depression who are resistant to medication or suicidally depressed. Medics are calling for more specialists centres and trials to be set up to explore the drug’s potential under controlled conditions.

“We need more money so we can use the drug more widely in medical research as we believe it has potential to be transformational in providing urgent care,” said Michael Bloomfield, clinical lecturer in psychiatry at University College London.

“There is enormous interest and excitement in the field about the potential therapeutic effects of ketamine for severe depression. While the drug has been around for decades as an anaesthetic, the science of it as a treatment for severe depression has only really taken off in this century,” he added.

It is estimated that about 3% of the UK population, or nearly 2 million people, suffer from depression. A small proportion of them – about 158,000 – have depression that resists treatment.

Currently, only 101 people are able to access ketamine, at a treatment centre in the UK at Warneford hospital in Oxford. About 40% showed sustained improvement after taking it.

Doctors are able to prescribe it because it is a licensed anaesthetic. But they have to use it “off label” for people with mental health problems. This essentially means it is being used for a different purpose from the one it was licensed for.

READ:  Scientists: Depression is a physical illness which could be treated with anti-inflammatory drugs

To become more widely available, more trials and specialist centres would need to be set up to explore the long-term effects, but funding treatment centres is expensive.

Another expert, Prof Allan Young from the Royal College of Psychiatrists, hailed ketamine as “one of the most exciting developments in mental health in recent years”. He added: “We need to continue to gather evidence on benefits and harms of this treatment but ketamine may be a paradigm shift, delivering real benefits to patients.”

He said: “Mental health is under the cosh and it’s one of the worst parts of the NHS for funding. We hear a lot about A&E cuts but a lot of people presenting at A&E do so for mood crisis or suicidality. Ketamine is a way of treating that, but there is little money to set up clinics.”

Dr James Stone, clinical senior lecturer at King’s College London, agreed, saying studies suggested ketamine reduced suicidal thoughts very rapidly, in less than one hour. “Although much more research is needed in this area, it is one of the most exciting aspects of ketamine’s unique antidepressant profile.”

No one knows exactly how ketamine, often thought of as a party drug of abuse, works for depression, but it is a disorder of overactivity in the brain, with excessive connectedness between the emotional regulation area and other parts of the brain. It is believed ketamine reduces this.

Doctors fear the potential may be lost without more money for testing the drug. Dr Rupert McShane, a consultant psychiatrist at Warneford hospital, worries that without specialist centres monitoring use, unregulated private clinics could be set up, as they have been in the US.

McShane said: “Paradoxically, by tracking ketamine use, we will, in the end, see wider use. Without robust monitoring, ketamine could easily go the way of all previous powerful psychiatric medical treatments: overuse, backlash and stigma.”

Bloomfield urged the government to support bigger trials: “Large scale research studies are very expensive and so this would require large investment from government and/or charities. Unfortunately, medical research spending for mental illnesses is extremely low compared to other medical conditions. Clearly this needs to change if we are to improve treatments in the future.”

Young said: “Dr McShane and I and others feel that this powerful treatment should be used very carefully. Ketamine is likely going to be a real advance for treating depression but we need to make sure, as far as possible, that it is used with all due care.”