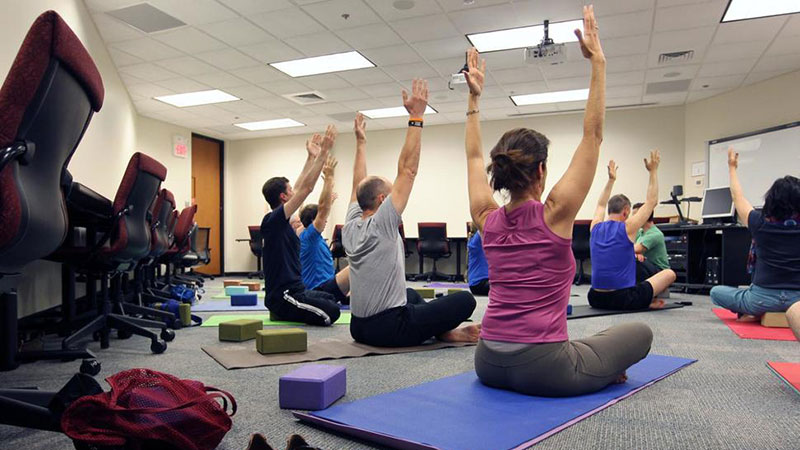 Some industry leaders are focusing on well-being as well as other aspects of their employees’ health.

Joe Sifer was a moody, agitated and sometimes angry young employee at Booz Allen Hamilton in 1996. He suffered at work. He was told he had potential but he needed help.

Now a senior vice president at that same strategy and technology firm, Sifer said without the care the company provided him 20 years ago, he would not be where he is today.

“They helped me get on the path of emotional improvement, emotional awareness and of emotional health, and that made a huge difference,” Sifer said.

Sifer is one of millions of Americans who have suffered from mental health issues at some point in their lives. One in four adults–approximately 61 million Americans–experiences mental illness every year, according to a study by National Alliance on Mental Illness.

While many nonprofits, government agencies and local communities participate in initiatives such as the Campaign to Change Direction to raise awareness about mental health, some leaders in the corporate world have also adopted emotional health of their employees as a priority.

“At Booz Allen Hamilton, we pick up emotional well-being, emotional health and mental health as part of our leadership culture,” said Sifer, who now leads more than 4,000 employees. “It is essential to how we work as a people-based enterprise.”

Dealing with mental illness can be just as challenging as dealing with physical disabilities at a workplace where you have to constantly interact with people, Sifer said, and sometimes these issues make top employees unable to perform their best.

“We know that mental health has no boundaries, and we also know that most of the day is spent in the workplace,” said Andrea Inserra, senior vice president at Booz Allen Hamilton. “As corporate leaders, we need to be concerned for the well-being of our colleagues.”

“Healthy employees are productive employees,” said Don Weber, CEO of Logistic Health Incorporated. “They need to be at the best state of their health both physically and mentally. Why wouldn’t we as employers want that for the employees and their families?”

“Actually integrating behavioral health and emotional well-being into all of the organization’s health and wellness activities is really the key,” Ballard said. “It is really critical that it is part of the overall health care discussion.”

Aetna, one of nation’s largest insurer, has had some success with its meditation and yoga programs that started in 2012 as part of its wellness program. On average, the 13,000 employees who have participated in at least one class have reported a 28 percent reduction in their stress levels, a 20 percent improvement in sleep quality and said they have gained 62 minutes of productivity per week per person.

READ:  Here's why your attitude is more important than your intelligence

“It is about this notion of attending to the mind and attending to what state of mind and how that impacts your overall ability to be productive and to be healthy,” said Louise Murphy, president of Aetna Behavioral Health. “Certainly we have seen the benefit of that in this particular program and many others.”

“Our employees get three hours of wellness time a week,” Weber said. “That is time away from work to use our wellness programs. We don’t lose employees because they don’t want to work there.”

Although we have seen some progress, the most challenging part of mental health issue in the corporate world is still getting rid of the stigma, said Clare Miller, director of partnership for Workplace Mental Health at American Psychiatric Foundation.

“There’s a lot of stigma about mental health and reaching out,” Miller said. “If you are an employer and are educating the employees about mental health, you are really sending out that message that it’s okay to reach out for help.”

Serving a network of more than 4,000 corporate employers, the partnership for Workplace Mental Health is a program that works with businesses of all sizes to combat mental illness stigma. The program also helps showcase successful mental wellness programs at businesses for partners to learn from each other.

“There is a huge amount of money that is wasted because of untreated mental health issues,” Miller said. “People wait a long time to reach out for help because they are worried.”

This is also where support from senior leaders and colleagues come into play.

“There is often a real compelling reason for employees to not disclose this [issue]in the workplace because they are still worried about not getting that promotion, getting treated unfairly, seen as not as competent as their peers or coworkers,” said the American Psychological Association’s Ballard. “Senior leaders and supervisors should act as role models and help start discussions and provide emotional support on the job.”

That is exactly what Sifer wants to focus on as the vice president at Booz Allen Hamilton.

“I was one person who was reached out 20 years ago, who was brought into this circle of trust by senior leaders,” Sifer said. “I think showing that care, taking the risk, getting pass the stigma and doing something material to help, and doing that many times over can really pay tremendous dividends.”