You are at:Home»Stories»The homeless man who went to Harvard Law with John Roberts

Alfred Postell is seen in downtown Washington. He lives on the streets despite graduating from Harvard Law School. (Terrence McCoy/The Washington Post)

The judge settled his gaze on the homeless man accused of sleeping beside an office building in downtown Washington.

It was a Saturday afternoon in early April at D.C. Superior Court, and Alfred Postell, a diagnosed schizophrenic, stood before Judge Thomas Motley.

Postell’s hair was medium length and graying. His belly spilled over his pants. A tangled beard hung from his jowls.

“You have the right to remain silent,” a deputy clerk told Postell, according to a transcript of the arraignment. “Anything you say, other than to your attorney, can be used against you.” 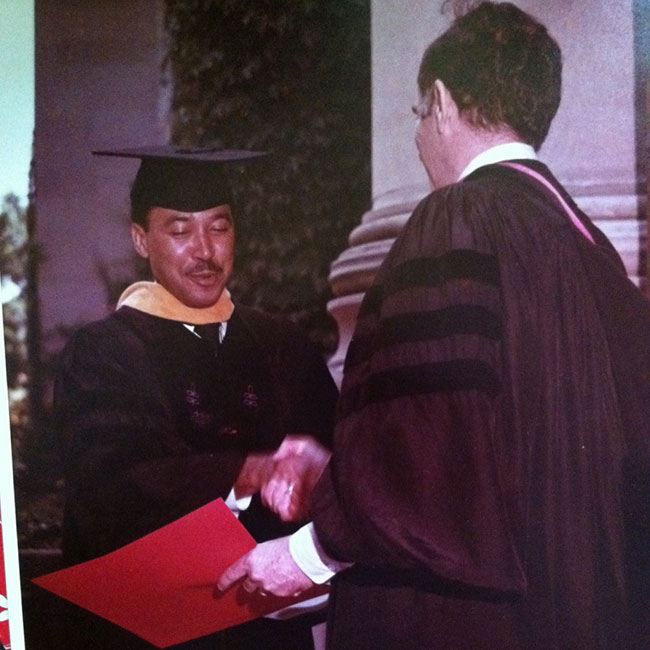 A family photo of Alfred Postell, a graduate of the University of Maryland and Harvard Law, at his Harvard graduation. He is currently homeless and living in the D.C. area. (Family photo)

“I have to return,” Postell protested, offering a convoluted explanation: “I passed the Bar at Catholic University, was admitted to Constitution Hall. I swore the Oath of Office as an attorney at Constitution Hall in 1979; graduated from Harvard Law School in 1979.”

That got Motley’s attention. He’d also graduated from Harvard Law School in 1979.

This homeless man — who totes his belongings in white plastic bags, haunts the intersection of 17th and I streets NW and sometimes sleeps at a church — studied law alongside U.S. Chief Justice John G. Roberts Jr. and former Wisconsin senator Russ Feingold. All of them graduated from Harvard in 1979.

Motley, who declined to be interviewed for this story, paused for a moment before concluding, “But I have no choice in the matter.”

He ordered his former classmate back to the D.C. jail until the charges against him could be resolved. 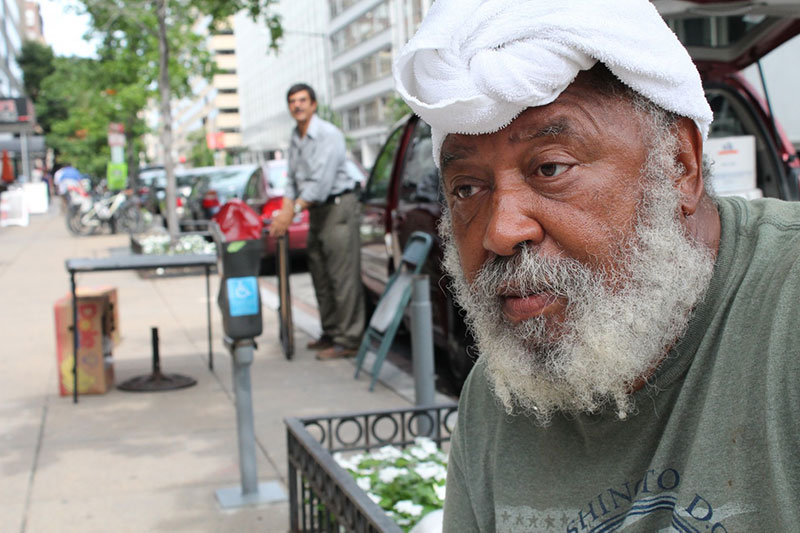 Alfred Postell, who is a diagnosed schizophrenic, haunts the intersection of 17th and I streets in Northwest Washington. (Terrence McCoy/The Washington Post)

In a city with thousands of homeless people, Postell may be the District’s most academically distinguished. Diplomas, awards and certificates clutter a closet at his mother’s apartment, buried artifacts of a lost life. He holds three degrees: one in accounting, one in economics, and one in law.

On a summer evening, he sits inside a McDonald’s on 17th Street NW, a white towel wrapped around his head like a turban.

Listening to him talk about his life is like dive-bombing into a dream. Everything at first sounds normal. But things quickly fall into disorder. The chronology hiccups. Incongruous thoughts collide.

But these pronouncements always arc back to a single idea. It anchors Postell in the turbulent waters of his schizophrenia. Postell, he tells himself and others, is an educated man. He worked hard. He did right.

Postell, born in 1948, was the only child of a mother who was a seamstress and a father who installed and fixed awnings. He grew up knowing what it meant to live without. He was a normal boy, says his mother, Ruth Priest, but always focused and motivated.

He wanted more than what his parents had. So after graduating from the District’s Coolidge High School, he juggled a day job while working his way through an associate’s degree at Strayer College. Achievement fed achievement. He passed the CPA exam and took a job as the audit manager at an accounting firm, Lucas and Tucker, where he said he pulled in an annual salary of more than $50,000 — big money back then. But Postell wasn’t done. He went to the University of Maryland for a degree in economics. Then, even before he’d graduated, he clacked off an application to Harvard Law — and was accepted.

“It seems like every couple of years I would become aware of a new achievement or plateau that you have reached,” wrote E. Burns McLindon, a prominent Bethesda accountant who instructed Postell at Strayer, in a letter Postell framed. Strayer had just given Postell its Outstanding Alumni Achievement Award. “Your example,” wrote McLindon, who died in 2012, “serves as a true example to our young people today to gather up within themselves the determination and ambition to succeed.”

‘One of the top students’
Scrolling through the 1979 Harvard Law School yearbook online is an exercise not unlike watching a segment of “Before They Were Famous.” There’s ­moppy-haired John Roberts. There’s grinning Ray Anderson, who went on to become the NFL’s executive vice president of football operations. There’s 24-year-old Thomas Motley, active in the Black Law Student Association, in a suit and tie. And there’s Alfred Postell.

He’s 31, older than most of the others, wears a neatly trimmed mustache and has a receding hairline. He bears the look of a man who has already had success in life. And expects much more to follow.

Classmate Marvin Bagwell, several years Postell’s junior, remembers him arriving to class in a coat and bow tie while others stumbled in, sleepy-eyed.

“There was a very quiet dignity about him,” says Bagwell, now a vice president at a large insurance company. “He was brilliant and could ask introspective questions that got to the core of the matter.”

Echoes of that sentiment emerged in interviews with five classmates. “He worked extremely hard and was extremely disciplined,” says classmate Piper Kent-Marshall, a longtime senior counsel with Wells Fargo.

And he was immaculately dressed and groomed. “I wouldn’t have been surprised if someone told me he manicured his nails,” another classmate says.

That’s why the Harvard grads were so surprised to learn what had become of Postell. How could this man — so articulate, so elegant — end up eking out an all-but invisible existence on the fringes of the nation’s capital?

“It is an in­cred­ibly tragic and sad story,” Kent-Marshall says, “because in law school, he was one of the top students and a very, very, very bright and charming man.”

‘Living the rich life’
If there are clues to what precipitated Postell’s descent into schizophrenia, they’re buried in the years after he graduated and returned to the District.

He took a job at what was then known as Shaw Pittman Potts & Trowbridge, a respected law firm that had the year before tried but failed to recruit future Supreme Court Justice Sonia Sotomayor. In those years, the firm was expanding at rapid clip. When Postell arrived, according to two people who worked there at the time, he was the firm’s only black lawyer. Bolstered by his background in accounting, he was put on the tax team and soon came to know a young lawyer named Frederick Klein.

The two of them were hired within a year of each other. Both made $35,000. Klein was struck by how well Postell dressed. “He was very urbane,” says Klein, now with DLA Piper Global Law Firm. He was cultured, thoughtful and soft-spoken.

Postell was so soft-spoken, in fact, that several lawyers who worked at Shaw Pittman couldn’t recall anything about him. Klein and two others who did remember him couldn’t or wouldn’t say why the firm let him go a few years after he was hired.

“I am not comfortable talking to you about this,” Martin Krall, once a partner at Shaw Pittman, writes in an e-mail. “It happened too long ago, I have not been a partner in the firm for more than 20 years and do not have access to its personnel files, if they even exist for matters this old.”

That few remember what happened to Postell perhaps betrays the illness that seized him. Schizophrenia creeps. Some people, especially those as accomplished as Postell, can hide their symptoms for months. As the victim withdraws from social and work life, plunging into isolation, relatives, friends and co-workers may not notice anything amiss.

[From the archives: My son is schizophrenic and homeless]

Then there’s a snap. Psychologists refer to this moment as a “psychotic break” or a “first break.” It’s when a victim’s slackening grip on reality finally ruptures, cleaving their lives into two clear categories: before and after.

“This kind of rapid decline is sadly not uncommon,” says Richard Bebout, director of Green Door, a mental-illness center that works with the homeless. “I know people who have gone to medical school, graduated college in the top of their class, then get struck down. It’s like the story of John Nash of ‘A Beautiful Mind.’ ”

But the speed can leave families grasping for answers.

“He had all of these fancy things, a nice boat that he used to sail all over the place,” says one relative, LaTonya Sellers Postell. “He was living the rich life. Then he just all of a sudden, he bugged out. No one knows exactly why it happened. . . . He lost all of his material things. It’s been crazy. Absolutely crazy.”

Even his mother, now 85, can’t explain what happened. A darkness one day fell over her son, Priest says. He kept talking about getting arrested. He thought the police were after him. Then he had a bad breakup with a woman he loved. Shortly afterward, Postell had his psychotic break.

‘Beyond my useful life’
When Postell’s mother didn’t think she could care for him anymore, she turned to a local pastor, Marie Carter, who took him into her home on Allison Street NE in the mid-1980s.

Her daughter, now 60, thought Postell would be there for a few weeks or months. Instead he stayed decades, losing whole days to the television or lounging in a nearby park, watching people pass.

It’s a strange thing, how quickly 30 years can go by. The only mark Postell made on the public record in that time was in the form of criminal charges. He picked up a theft charge in 1989 in Ocean City District Court. He also got hit with some misdemeanor charges in the District in the 1990s. But beyond that, he’s been a ghost.

“You get into a firm, it’s prestigious,” Postell says. “And when you lose that position, it’s like suicide. It’s all over. It’s atrophy. Or as accountants say, it’s to be obsolete. You know what that means? Obsolescence. Beyond your useful life. I was beyond my useful life.”

Postell drifted. He began haunting the same storefronts every day. One was Avondale Coffee Shop on Michigan Avenue NE — until the owner barred him from the premises, leading to his arrest in April of 2014. Postell also found his way to the Brawner Building at 17th and I streets. Police have arrested him twice there, charging him with two counts of unlawful entry — allegations that, after 30 years, thrust Postell back into the orbit of Thomas Motley.

After graduating from Harvard, Motley worked at Steptoe & Johnson, a prominent D.C. law firm. He then became a federal prosecutor, before being appointed to the bench by President Bill Clinton.

The day Motley arraigned Postell, the homeless man didn’t recognize him. Too many years had gone by. But Postell would later say he remembered Motley from class. (He does not, however, recall Chief Justice Roberts.)

And there is hope for Postell. The mental health team at Green Door has begun working with him, as has Pathways to Housing, another organization that helps the homeless. His mother has tried to scrape together some money to get him off the street.

But none of that seems to interest Postell on a recent morning outside the Brawning Building. He sits alone. Newspapers are scattered about his feet. He picks up one.